These small traps were constructed to limit debris crossing from the forest into the adjoining propertyThe aim of debris traps is to catch larger slash that would otherwise be transported out of a catchment in flood flow conditions. They are often used in high risk harvest and post-harvest river catchments to limit slash movement downstream from the forest, especially where it could cause problems for downstream property owners or infrastructure like roads, bridges, culverts, farm fencing, and recreational areas. Debris traps are generally constructed in the channel of a river. Debris traps need to be carefully located, designed and constructed. Refer to Debris Flow Control Structures for Forest Engineering, D.F. VanDine, British Colombia Ministry of Forests 1996 and www.geobrugg.com/en/Debris-flow-barrier-UX-7949,7859.html.

The NES-PF has many permitted activity conditions for installing, using, maintaining and removing debris traps. A resource consent is required if any of the NES-PF permitted activity conditions cannot be met, so check the regulations prior to construction. Resource consent is needed to install debris traps in catchments larger than 20 ha, unless the debris trap is located on a terrace on one side of the river as opposed to in the active ‘bankfull’ bed of the river. The terrace(s) should allow the overflow of any excess material that may build up against the trap, to reduce pressure and risk of the structure failing.

Logs can be an easy and effective option in this situationCareful location of debris traps is critical to reduce impact on the river, effectively trap larger debris, and for ease of access for construction and removal of trapped material. It is preferable to locate the debris trap in a location with a readily available area to dispose of any trapped material. For example, a flat area above flood flow level. This will reduce the cost of maintaining the debris trap. If cleaning requires debris to be removed off-site, then the structure will need to have truck access. Do not construct where the natural alignment of the river could lead to the channel alignment or gradient being altered by debris building up behind the structure and creating a weir. Also, do not locate a debris trap where it will cause erosion of the banks and bed of a river, or if the debris trap could adversely affect downstream properties and infrastructure.

Good design is essential. This will help ensure that the debris trap is effective, and has met regulatory requirements. Design the trap for a minimum six year engineered life, to ensure that the structure will be effective for the length of the post-harvest ‘window of vulnerability’, when slash movement is more likely. There must be free movement of water through the structure and fish passage must be provided. Consider using specialist engineering advice when planning and designing larger structures, or where the consequences of failure could be significant.

There are several design features that should be incorporated to reduce the risk of the structure from failing, and to minimise the combined energy of water and weight of debris on the trap during peak flows:

Effective slash trap installed upstream of road and bridge. An accessible site allows removal of slash and maintenance of the debris trap 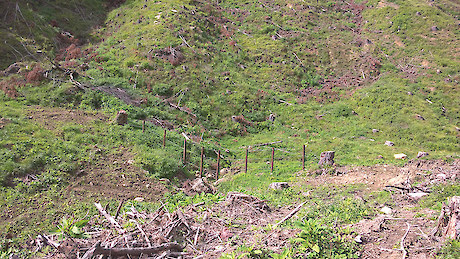 Radiata stumps are not preferred anchors, as many will have lose their tensile strength within the design life of the structure

There was too much energy in the river and the structure failed. The storm flow moved large boulders, as can be seen of the far river bank. Consider putting traps in side creeks or where the river’s energy lowers

A tapered debris retention fence during heavy rain. Note the debris trapped in the structure